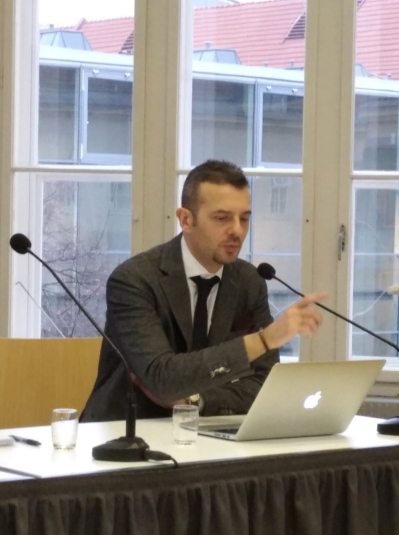 Francesco Finocchiaro studied Oboe at Catania Conservatory and Musicology at the University of Bologna. His research interests focus on the points of connection between composition, theory, and aesthetics in twentieth-century music. He has dedicated his studies to the Second Viennese School and has released the Italian edition of Arnold Schönberg’s treatise The Musical Idea (Astrolabio-Ubaldini, 2011). He has also published extensively on film music, with particular regard to the relationship between cinema and musical avant-garde. He has taught in Italy at the Universities of Bologna, Milan, Florence, Catania, as well as at Campobasso and Ferrara Conservatories, and in Austria at the University of Vienna.

From 2013 to 2019 he was a Senior Research Scientist on silent film music at the Department of Musicology of the University of Vienna.

To the University of Vienna’s Data Protection Declaration

Throughout the 1920s, German-language print journalism addressed fundamental questions about the encounter between music and cinema. Prominent composers, musicologists, film theorists, and philosophers contributed to this broad discussion on the proper role and design of film music, encompassing a wide range of arguments and perspectives.

This journalistic discourse on film music forms the core of the FMJ research project. The research team examined a representative selection of articles, essays, and reviews published in German-language music and cinema periodicals from around 1907 to the early 1930s. A selected corpus of sources has been incorporated into a digital open-access database. The comprehensive scholarly exploration of these documents led to a number of book chapters and journal articles, as well as a monographic treatise on the “historical aesthetics” of silent film music.